Skip to main content
⚒ This website is a work in progress. If you want to help let us know on GitHub 🙏

Xamarin is an open-source platform maintained by Microsoft since 2016 to build applications for mobile and desktop using C#. It is used by companies such as Alaskan Airlines, Coca-Cola and Honeywell. You can learn about other companies in its case studies page.

Xamarin is actually a brand with several products underneath. At a high level, it provides an environment where C# code can be executed and interact with the platform. Depending on how much abstraction the developer wants (from just running C# for business to having a common UI), will determine the combination of products to use:

Unless stated otherwise, the information in the following sections is specific to Xamarin.Forms, which is the part that makes it part of Platform controls.

The implementation details for the iOS and Android are different and can be checked in the Internals section.

Microsoft is working on .NET MAUI:

.NET MAUI is open-source and is the evolution of Xamarin.Forms, extended from mobile to desktop scenarios, with UI controls rebuilt from the ground up for performance and extensibility. If you've previously used Xamarin.Forms to build cross-platform user interfaces, you'll notice many similarities with .NET MAUI.

While Xamarin products still receive bug fixes and security updates, it is .NET MAUI the product that is actively being developed.

As seen earlier, Xamarin has several products, each one with its own release cadence. For example, Xamarin.iOS 14 (and its minor versions) is intended for Apple devices running iOS 14 so the releases are somehow related to when Apple releases a new version of the Operating System. The same happens with Xamarin.Android.

Because Xamarin.Forms is a UI framework that runs on top of the above and its release cycle does not depend on any platform schedule. Xamarin.Forms 5 was released in January 2021. Up until that moment there were minor releases every couple months, with service releases (bug fixes version) as needed. While v5 has received several service releases, there has not been any minor update. As mentioned earlier, Microsoft is working on .NET MAUI which is the evolution of Xamarin.Forms and most efforts seem to be dedicated to it.

While Xamarin is OSS (MIT licensed), the ultimate decission maker is Microsoft.

Even though this page is more about Xamarin.Forms, it is important to understand the underlying technology that powers it. There are some signficant implementation details between iOS and Android that are worth calling knowing.

Android Runtime (ART) is an application runtime environment used by Android. ART compiles entire applications into native machine code upon their installation. This technique is called Ahead-of-Time (AOT) compilation. The pros of this is that applications tend to be faster. The downside is that they take more space in the device and the installation time is longer because they need to be compiled.

Xamarin.Android applications compile from C# into Intermediate Language (IL) which is then Just-in-Time (JIT) compiled to a native assembly when the application launches. Xamarin.Android applications run within the Mono execution environment, side by side with the Android Runtime (ART). Xamarin provides .NET bindings to the Android.* and Java.* namespaces. The Mono execution environment calls into these namespaces via Managed Callable Wrappers (MCW) and provides Android Callable Wrappers (ACW) to the ART, allowing both environments to invoke code in each other.

When using Xamarin.Android, your code is managed code.

For more information you can visit the official Xamarin.Android Architecture page. 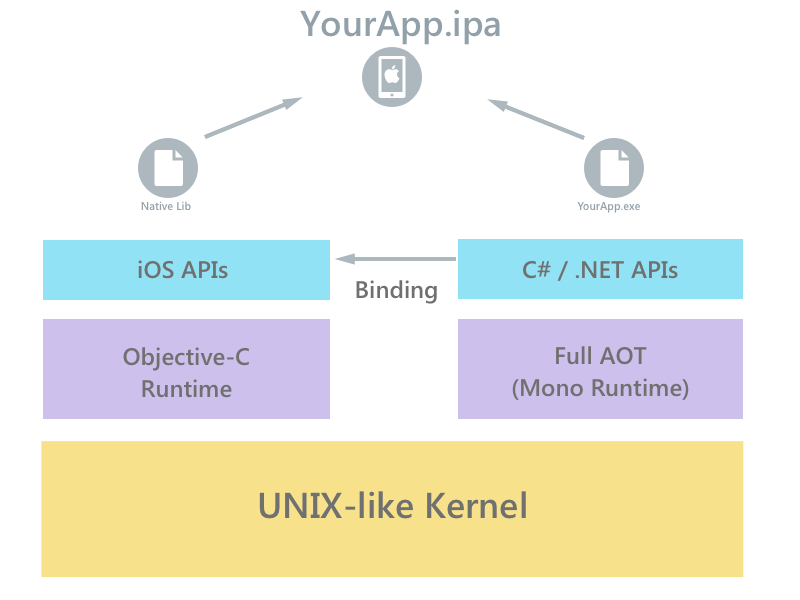 When using Xamarin.iOS, your C# code is native code.

While native has a series of improvements over JIT like reduction in the startup time and some other performance optimizations, it also has some limitations.

For more information you can visit the official Xamarin.iOS Architecture page.

As mentioned earlier, Xamarin.Forms is an UI framework that requires a .NET runtime (like the one used in Xamarin.Android and Xamarin.iOS).

At runtime, Xamarin.Forms utilizes platform renderers to convert the cross-platform UI elements into native controls on Xamarin.Android, Xamarin.iOS and UWP. This allows developers to get the native look, feel and performance while realizing the benefits of code sharing across platforms.

Xamarin.Forms applications typically consist of a shared .NET Standard library and individual platform projects. The shared library contains the XAML or C# views and any business logic such as services, models or other code. The platform projects contain any platform-specific logic or packages the application requires.

For more information you can visit the official [Xamarin.Forms internals].